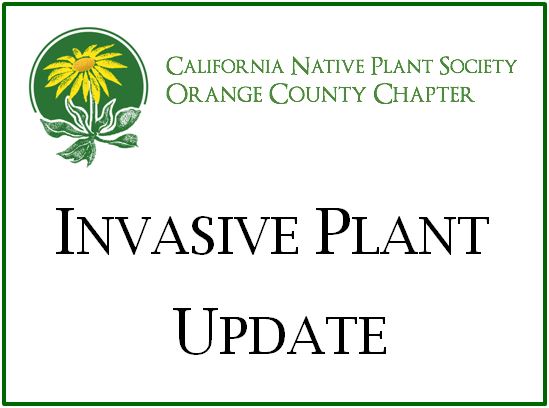 They are proposing to add:

You can view all information at http://cal-ipc.org/ip/inventory/update.php, including individual assessments, summary tables, the project team, and how to submit comments.

Feb 24, 2017
Volutaria Assistance Needed:
Volunteers are needed (no experience required) to remove Volutaria from Borrego Springs this spring. Volutaria tubuliflora is a new and highly invasive weed in Southern California. This would be a great opportunity to remove a highly invasive weed before it becomes a widespread problem as well as visit Borrego Springs for some desert recreation. The Borrego Springs infestation occurs on 20 sites scattered over a 5 mile span and is in desperate need of volunteers to pull/hoe weeds as well as map the spread. If interested contact  Chris McDonald, . Mid-Feb and March. Depending on availability, The UCI Anza-Borrego Desert Research Center has offered overnight facilities (approx. $40 or less per person) to Volutaria pullers.
More Volutaria:
Seperately, OC CNPS, OC Parks and The Newport Bay Conservancy are coordinating a Volutaria pull at Upper Newport Bay, the sight of the second of three US. Volutaria infestations. Details and dates are not ready at the time of this publication, but is likely to be in mid to late March. If you would like to be notified of this and other local invasive plant opportunities please send a brief note to .
Weed Management Area:
OC CNPS was well represented at a January Weed Management Area (WMA) meeting in Irvine. Several discussions ensued about Orange County invasive plant issues and activities. OC CNPS is now an active member of this important collaboration and Orange County will now be represented. It was decided that future quarterly meetings of this WMA will be alternated between Riverside and Orange County.
On Feb. 2:
Cenchrus echinatus was confirmed at San Onofre State Park.
On Jan. 19:

A survey by OC CNPS revealed a new large colony of Volutaria tubuliflora at Upper Newport Bay on the mesas adjacent to Irvine Blvd. The population appears to number in the thousands. The colony was mapped and posted to Calflora. Several interested parties, including OC Parks, Cal-IPC and others were notified, with management beginning on January 16.

On Dec. 29:
Ehrharta calycina - perennial veldt grass in Emerald Canyon, Laguna Coast Wilderness Park, was visited and mapped by OC CNPS.
Brassica tournefortii - Sahara mustard. A new colony was detected and mapped on Big Bend Trail, Laguna Coast Wilderness.
On Dec. 25:
Brassica tournefortii - Sahara mustard. A new colony was detected and mapped just off Laguna Canyon Road, near the intersection of Forest Drive, Laguna Beach.
On Dec. 17:
The OC CNPS Emergent Invasive Committee met. Among other business: a thorough species review,  additions and deletions to the Emergent Invasive plant list for 2017, discussion of an Orange County Weed Management Area and possible collaboration with the Orange County Natural Communities Coalition (NCC).
On Dec 1:
A second small colony of a Chrysanthemoides colony in lighly maintaned landscaping off Nyes Place in Laguna Beach was re-examined by OC CNPS and determined to be the non-invasive species Chrysanthemoides incana, not the highly invasive Chrysanthemoides monolifera.
On Nov. 13:
Two additional colonies of Delairea odorata - cape ivy were discovered and plotted by OC CNPS.
On Nov 10:
The expanding colony of Senecio linearifolius - Australian linear-leaved fireweed along Pacific Island Drive in Laguna Niguel was accurately plotted and posted to Calflora by OC CNPS.

On Nov. 3:
Parthenium hysterophorus - Santa Maria feverfew. CDFA just published a CA Pest Rating Proposal to list this species as an "A" rated pest. The public comment period opened and ends December 17. OC CNPS posted a statement of support on this proposal.
The two detections in Orange County (in which our committee has been the catalyst) precipitated the proposal. Currently, these are the only two extant occurrences in CA. The OC Ag Commissioner is managing the main population in Santa Ana and the two plants located in the San Diego Creek Channel (not far from the Duck Club) were both removed earlier this summer.
On Oct. 22:
Lepidium latifolium -  perennial pepperweed. A new three acre population was discovered and plotted in a basin near MacArthur Blvd. and Bison Street, Newport Beach.
On Oct. 16:
Iris pseudacorus - yellow flag Iris. A population along Laguna Creek (OC's largest) was visited during management efforts. The Laguna Canyon Foundation, in conjunction with The City of Laguna Beach, has contracted with The CA Conservation Corps to perform storm channel work and invasive plant removal in this corridor. The CCC team was present during the visit, along with three biologists. Management guidance for the iris was offered by OC CNPS, especially the importance of complete rhizome removal and disposal.
On Oct. 14:
Volutaria tubuliflora - Moroccan knapweed. During research on a related species OC CNPS discovered possible records dating to 2003, and maybe as early as 1987. A photograph and comments of "Centaurea muricata" by Robert DeRuff (deceased) is made in The Vascular Plants of Upper Newport Bay. A voucher specimen of the same record was deposited at the UC Riverside herbarium, also under the name Centaurea muricata. We now believe these records may refer to Volutaria tubuliflora. In the records Mr, DeRuff mentions both Big Canyon and the bluffs not far from the Muth Center, both locations of our 2015 and 2016 records.
If the specimen at UCR is confirmed as Volutaria tubuliflora this would move the date of California introduction forward by at least several years and would also change the introduction point from Boreggo Springs to Newport Beach.
On Oct. 12:
Parthenium hysterophorus - Santa Maria feverfew. The OC Ag Commssioner's office reported back to OC CNPS that the colony in Santa Ana, discovered by us on Sept. 1 has been removed. They also reported that the property owner is cooperative and that the site will continue to be visited at regular intervals to ensure control. Thais is the second or third record for CA and a high priority for CDFA.

On Oct. 8:
One of SoCal's best botanists, Rick Riefner, detected and reported a colony of the highly invasive boneseed bush - Chrysanthemoides monolifera in Newport Beach. The colony was site checked, mapped and posted to Calflora the following day. This is the third detection in Orange County and perhaps only the fourth in the U.S.

On Sept. 23:
On Friday we participated in a second conference call regarding a proposal for Volutaria tubuliflora (knapweed) eradication in Southern California (three sites). The group includes participants from Cal-IPC, S.D. County Ag, UCCE, UCR, CDFA, S.D. Co. Public Works, Anza-Borrego S.P., IRC and volunteers.
The working group is centered around a Cal-IPC grant request to The National Fish & Wildlife Foundation. A funding decision is expected in early January, with on-the-ground action beginning Immediately thereafter. By far, the Anza-Borrego infestation is the most serious, but the Newport Bay colony is also significant, esp. due to its urban location and potential for further dispersal.

A local byproduct of this effort would be the development of an Orange County WMA, which currently does not exist. Here are highlights of the OC related parts of the call:
Following the call, Riley Pratt (IRC), Doug Johnson and Ron Vanderhoff briefly discussed the possibility of OC Ag involvement. OC Ag has the authority to set emergency quarantines and protocols involving the movement of green waste off of infested sites. Volutaria seed is wind dispersed and we have concern about propagules being moved from the site. We also briefly discussed the need for protocols regarding the City's ongoing fire abatement in the Big Canyon area.
On Sept. 21:
Cal-IPC is submitting comment to the California Wildlife Conservation Board (WCB) on their draft "conservation vision," which will guide their work over the next five years. WCB has funded two regional early-eradication projects in the last two years, which is a good start. A lot more needs to be done, and stopping invasive plants should be made an explicit priority in their planning. Unfortunately, WCB's draft plan does not even mention invasive species. OCCNPS was asked to sign-on as an endorser of this request, which OC CNPS has done.
On Sept. 15:
Dave Pryor and Ron Vanderhoff met with Laguna Canyon Foundation restoration biologist Alan Kaufman to discuss invasive plant removal in portions of Laguna Canyon Creek. We specifically observed the Delairea odorata - cape Ivy and Iris pseudacorus - yellow flag Iris infestations and discussed management options. Via a Laguna Beach city grant, the foundation is restoring portions of the watershed, which includes removal of these and other invasive plants. The foundation is also directing work by the CA Conservation Corps in other portions of the creek, where yellow flag Iris colonies exist.
A follow-up visit on Oct. 6, during the removal work, provided additional guidance. Present were Alan Kaufman and Josie Bennett of LCF, invasive management specialist Henry DeRocco and a crew from the CA Conservation Corps.
Other News