Wildflowers of Orange County and the Santa Ana Mountains

Books will be shipped promptly.

Describes over 600 species with one or more photos of each. Arranged alphabetically by plant family, the plants are described, summarized, and illustrated to facilitate learning. Similar plant specifies are mentioned and their differences highlighted.

Includes section on geology, geography, flower parts, scientific names, plant communities, and places to go wildflower-watching, all accompanied by photographs and illustrations. Though technical terms are minimized, those used are presented in a glossary. Written, edited, and review by professional biologists and local experts.

- Known and suggested places to find the plant.

- Meaning of its scientific name and name of the person that named it.

- For many, similar species with which it may be confused.

From shoreline of Crystal Cove State Park; to the canyons, grasslands, and foothills of Caspers Wilderness Park; beckoning peaks of the Santa Ana Mountains; and the rolling hills and washes of Temescal Valley, this book will be your guide to the beautiful wildflowers you encounter. 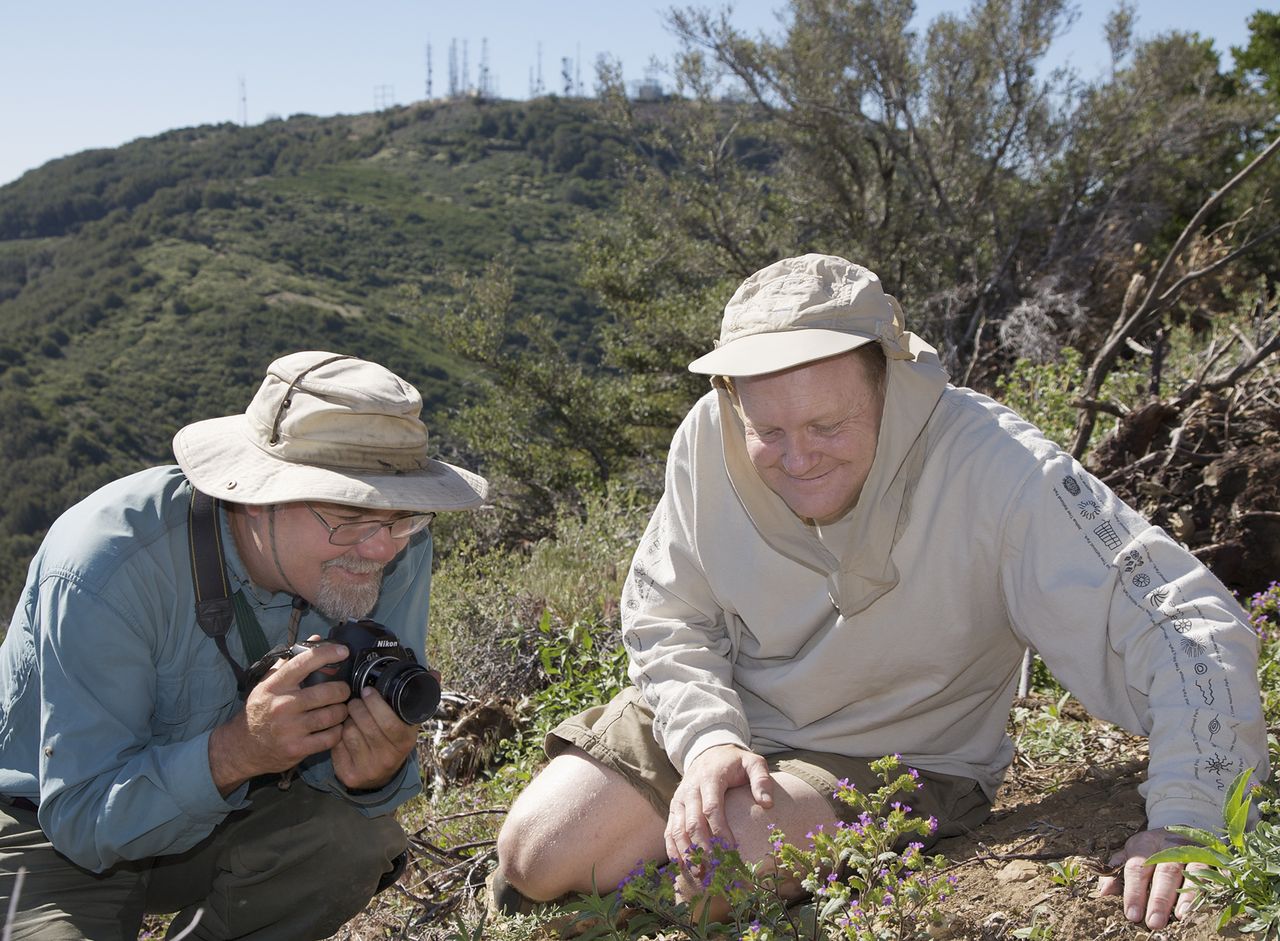 Robert L. “Bob” “BugBob” Allen is an entomologist, botanist, instructor, and photographer. Raised in San Juan Capistrano, he studied insects from a very early age. He and Fred attended Marco Forster Junior High School in San Juan Capistrano but never met until they entered Dana Hills High School, where both learned native plants in a natural history class. He attended Saddleback College in Mission Viejo, then California Polytechnic State University, San Luis Obispo. In 1982, Cal Poly awarded him a Bachelor of Science degree in Environmental and Systematic Biology. In 2006, he received his Master of Science degree in Environmental Studies from California State University, Fullerton. At CSUF, he taught entomology and biological illustration. He teaches nature photography, entomology, botany, and pollination classes in classroom and in the field. Bob is a Research Associate at the Rancho Santa Ana Botanic Garden and a Research Associate in Entomology at the Natural History Museum of Los Angeles County. He is now working on a book about California’s pollinating insects. He lives in Mission Viejo with his wife, Linnell, and son, Charles.

Fred M. Roberts, Jr., is a consulting botanist, artist, and author. He grew up in Dana Point, where thousands of acres of undeveloped grasslands and hiking opportunities contributed to a strong interest in natural history. While attending Dana Hills High School he became interested in reptiles, amphibians, birds, and plants. At Saddleback College, botany became his primary interest and he put together his first checklist of Orange County plants which he later published and is now in its third edition. In 1982, he received his Bachelor of Science in Geography with an emphasis on Botany from the University of California, Santa Barbara. From 1982 to 1991 he worked as an assistant curator in the Museum of Systematic Biology, University of California, Irvine. From 1991 to 1999 he worked as a botanist for the U.S. Fish and Wildlife Service before starting his own botanical consulting business. Fred is a Research Associate at the Rancho Santa Ana Botanic Garden. He is currently working on several book projects, including A Flora of Orange County, California. He lives in Oceanside with his wife, Carol, and their two personable cats.

This book is a treasure trove of information on a surprisingly varied range of subjects - part field guide, part encyclopedia, and part love letter to Mother Nature. A lifetime of fieldwork is condensed into a volume that is instantly an irreplaceable resource for biologists, conservationists, and naturalists in Orange County and beyond.

This extraordinary book will captivate aspiring and professional botanists alike with its wealth of gorgeous informative images and compelling descriptions. Anyone interested in the flora of California in general will find much of value here, including aspects of natural history that are rarely if ever encountered in plant guides and that speak to the authors’ vast field experience and observational skills.

This is the definitive Orange County flower guide we have all been waiting for! Not only have Allen and Roberts spent a lifetime studying the region’s botany but they have educated the public on the region’s natural resources. This book is the culmination of those efforts, and Orange County nature lovers are thrilled!

Experienced naturalists and native plant enthusiasts will find multiple reasons why they need to have this book. People new to wildflowers will find that its usefulness grows with their interests, offering the answers to their questions every step of the way. The authors are two of the region’s top field botanists/biologists.

This remarkable publication represents a love of nature and a dedication to sharing it. The authors know Orange County and the Santa Ana Mountains region, and they lovingly describe its special places, its plant life, and some of its wildlife.

This amazing new field guide is destined to become the new, lofty standard for regional history guides it covers plants of Southern California, in a detailed and interesting way that will appeal to both professionals and beginners. It will be a “must have” for anyone interested in natural history in California.

Wow! This book is a gem! The photographs are among the best I’ve seen. The entries are taxonomically complete, with useful information on diagnostics features for field identification, habitat, range, economic uses, and sometimes even chemistry. This is a “must” field book for the professional and amateur botanists, naturalists, and plant hobbyist of Southern California.